"A regular at Children’s Hospital New Orleans’ main campus, her nurses, who have been a part of her life for three years now, marvel at her perky disposition and fearlessness in the face of medical adversity." 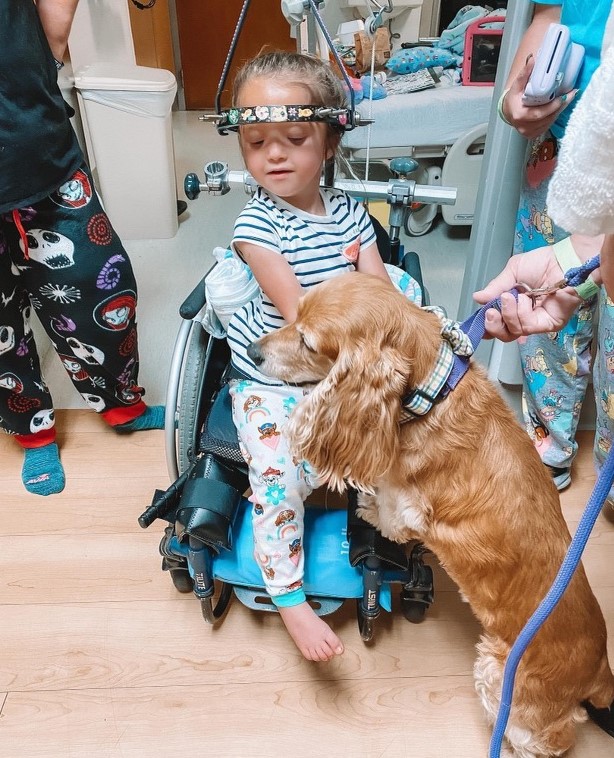 Zoe Rose Reed was born in 2016 in Morgan City, and immediately after birth is when her now long list of medical issues began. “Right after she was born, and they handed her to me, she turned blue,” remembered Zoe’s mother, Mickenzie. “The next thing I knew, she went into cardiac arrest, and while the medical staff worked on her, the decision was made to transport her via helicopter to Lafayette.”

She spent 39 days in Lafayette before it had become apparent to her doctors that she needed a pediatric heart specialist at Children’s Hospital New Orleans to determine the underlying medical issues causing her problems. It was then that she made the 50-minute helicopter flight to New Orleans aboard Abby, the hospital’s critical care helicopter. Diagnosed with a hole in her heart affecting all four chambers, she underwent her first heart surgery to repair her aortic arch at just two months old. But, at six months old, she had further problems requiring a second surgery.

Zoe’s medical issues continued as she grew, and when she was two years old, her care team performed a swallow test to find out why she wasn’t eating. The test revealed extreme scoliosis, or curvature of the spine. At this point Zoe was tested for a whole host of genetic diseases and was diagnosed with Noonan’s syndrome. This particular genetic syndrome impedes growth and comes with the possibility of both heart and spinal issues, which Zoe had, among other problems. Dr. Michael Heffernan became Zoe’s a pediatric orthopedic surgeon to care for her scoliosis.

“Early onset scoliosis with a 95 degree curve is always challenging”, explained Dr. Heffernan. “At the age of two, we want to see growth, but adding growth to scoliosis actually makes it worse. When a particular growth plate on either side of the spine feels pressure, it grows more slowly, making the equation more lopsided, and exacerbating the curve. We need to try and keep the spine straight so it can gain vertebral height, but it’s a complicated mix of castings and surgically-implanted growth rods which have to be changed out every six months.”

But, when the desired effect for Zoe wasn’t being reached with the rods, Dr. Heffernan decided upon a halo brace and traction to further elongate and straighten Zoe’s spine. Two years ago, Children’s Hospital New Orleans became the hospital in the region to house a pediatric halo program for scoliosis.

“You won’t find this program anywhere else in the Gulf South region because you must go through clinical trials, and get your doctors certified,” shared Children’s Hospital President and CEO, John R. Nickens IV. “In ten years, I expect everyone will be doing this, but for now, we’re taking the lead.”

The halo brace entails placing four small screws (under anesthesia) into the forehead and skull to secure a metal halo ring. In Zoe’s case, it was worn continually for one month, while slow, steady traction stretched her curving spine into a straighter pattern. At that point, the halo was removed and another growth rod was surgically inserted to hold the correction from the month-long stretch. That rod is secured by hooks on her ribs and pedicle screws at the bottom of her spine. The treatment of Zoe’s scoliosis was not at all about cosmetics. If untreated, severe scoliosis can push the lung out of the way, so it can no longer function.

At five years old, Zoe is still too little to contemplate a spinal fusion yet, but at some point in the future, that’s the goal. In the meantime, the rods will be changed every six months, and she may at some point get an electronic device which allows adjustment in a non-invasive manner.

“This is a marathon, not a sprint,” explained Dr. Heffernan. “At around the age of ten, when she’s considerably larger, and there’s enough room for her lungs to function properly, we’ll do a final spinal fusion to lock in the progress we’ve made. She started out with a 95 degree curve, and we’re down to 50 degrees.”

A regular at Children’s Hospital New Orleans’ main campus, her nurses, who have been a part of her life for three years now, marvel at her perky disposition and fearlessness in the face of medical adversity.

“This is an amazingly active child who doesn’t let anything stop her,” commented Patty Cadella, RN, and the nurse navigator for orthopedics. “My job, among other things, was to get her through the four weeks after her halo was placed. Imagine that you’re attached to weights with this gigantic thing on your head. Yet, Zoe wanted to have a dance party every day at the nurse’s station with her halo on. Zoe also likes to sing and color, so sometimes we’d take our paints across the street and sit under a tree. It’s our job here to keep her in a child’s world throughout her arduous medical journey. She’s the hero of the hospital and an inspiration to the older kids in the halo program who figure if Zoe can withstand her treatments, how can they complain? Our program is now two years old, and Zoe was our fourth patient. She’s just incredible and she makes it so easy to love her.”