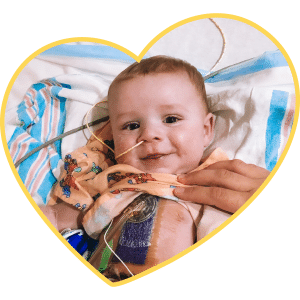 "The doctors told us that Emmett had a 50/50 chance of survival with the Norwood, but a zero percent chance without it, so the decision was clear."

When Megan Piper gave birth to her eighth and ninth children, twins named Emersyn and Emmett, her mother’s intuition soon kicked in. Megan realized that while Emersyn was normally growing and changing, Emmett was not making similar progress.

Emmett and his twin sister were born on December 10, 2019, and before they went back to their family home in Monterey, Louisiana, Megan noticed that Emmett had an irregular breathing pattern, and his hands and feet were blue in color. But it wasn’t until Megan brought Emmett back to her pediatrician a week later that more in-depth tests were performed. At this point, Emmett was not gaining weight as he should, and he was badly jaundiced.

Doctors performed several tests and no major issues were found. It wasn’t until an echocardiogram was done that doctors discovered abnormalities in Emmett’s heart. He was immediately transported to Children’s Hospital New Orleans by its helicopter, Abby.

“My mother and I drove to New Orleans after the helicopter left to meet Emmett at Children’s,” shared Megan. “We arrived late that night, but the team at Children’s had already begun treating him and setting everything up to take care of him.”

“They sat us down and explained what was going on, but to be honest, it went in one ear and out the other,” recalled Megan. “It was a lot to process, and we were exhausted. That next morning, doctors at Children’s met with us again and walked through the treatment plan they had created for Emmett.”

“The doctors told us that Emmett had a 50/50 chance of survival with the Norwood, but a zero percent chance without it, so the decision was clear,” said Megan. “Emmett did so well after the surgery, and we only stayed in the hospital a couple weeks for Emmett’s recovery, rather than a couple months.”

Emmett progressed well, and he and his family had weekly check-ups with Dr. Michael Brumund in Baton Rouge until he was about six months old. On June 18, 2020, Emmett had his second open heart surgery, a Glenn procedure, also performed by Dr. Pettitt.

Emmett also recovered well from this surgery, too, remembered Megan, again only having to stay in the hospital for post-op recovery for two to three weeks. Around this time, Emmett’s parents also learned that he was diagnosed with a moderate to severe tricuspid valve regurgitation, a type of heart valve abnormality in which the valve between the two heart chambers doesn’t close properly. Fortunately, this new condition is under control and Emmett has been doing well. Megan shared that Emmett may undergo a third procedure as soon as next summer, a Fontan procedure.

“The doctors and the staff at Children’s have been amazing,” shared Megan. “I would not have gotten through anything without them. They were just awesome with the emotional support, the direct support of helping us learn how to care for Emmett, they were always very informative, and they were always able to explain everything in a way we could understand.”

“We were paired with exceptional people at Children’s and I’m so thankful for that,” shared Megan.

As the Piper family awaits the next steps in Emmett’s treatment, Emmett is a very happy baby who loves to sing, play with all eight of his siblings, be around his parents and his Mimi, and to be outdoors.