"He rose to meet a very challenging situation and our rehabilitation team is so very proud of all his hard work thus far." 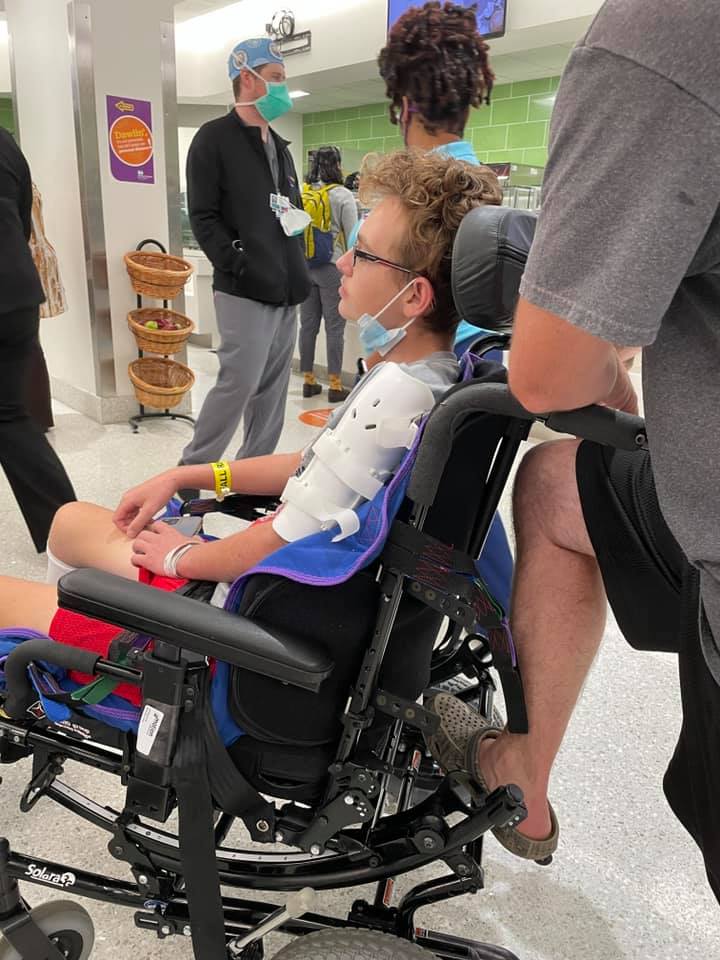 It was a regular summer day for 15-year-old Brennon Breaux until a friend was playing with a loaded gun, thought it was empty, and pulled the trigger. That bullet penetrated Brennon, entering through his back, going through both lungs, and out the other side of his body. He was airlifted to Lafayette General Hospital for two weeks, and then transported to Children’s Hospital New Orleans.

“I was at work when I got the call,” described Brennon’s mom, Gayla. “I didn’t believe it was true. Me and my sister-in-law left work together and went straight home. He was laying in the dining room fighting to breathe. I was afraid he was going to die.”

“At Lafayette General, they had to give him a blood transfusion,” said Gayla. “He was in the intensive care unit, and they had the chest tubes in for his lungs. His lungs collapsed twice. They got him ready to go to New Orleans for rehabilitation.”

Gayla says Dr. Scott Shultz and Dr. Lindsay Elliot were integral in Brennon’s healing process. Not only did Brennon have a long road for physical recovery, he also battled a mental recovery coming to terms with his paralysis.

“First, he was angry, and then he accepted what happened, “said Gayla. “He had his good and his bad days, and I was just thankful he was alive. I was going with the flow just like he was. We were out of it not knowing what was next.”

“I met Brennon upon his admission to our acute inpatient rehabilitation unit,” remembered Dr. Elliott “He had unfortunately sustained a traumatic spinal cord injury with resultant loss of sensation and movement in his lower extremities among other impairments and injuries.” Brennon’s rehab regimen focused therapy on his functional capabilities including his mobility and ability to care for himself. This required both Brennon’s and his family’s support and understanding of his diagnosis to train him to be able to care for himself in new and adapted ways. Brennon was working through physical therapy and occupational therapy. His mother remembers when he learned how to put his clothes on by himself and how to transfer himself into a bathtub on his own.

“Brennon demonstrated perseverance, determination and dedication to the task at hand,” said Dr. Elliott. “He rose to meet a very challenging situation and our rehabilitation team is so very proud of all his hard work thus far.”

Brennon Breaux stayed at Children’s Hospital from August 9, right up until Hurricane Ida made landfall in New Orleans. Now Brennon is home, and thriving with his newly acquired skills he worked so hard to gain in the Children’s Hospital rehab gym. He’s back in school and hanging out with his friends, fishing back to riding his four-wheeler.

Click here to learn more about how the Children’s Hospital’s Physical Medicine and Rehabilitation program helps kids and teens like Brennon.