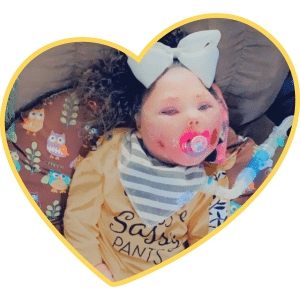 "There is much fear and plenty of setbacks, but she keeps breaking statistics by being so resilient."

The miraculous story of Claiborne Parish’s Ariella Sanders began at birth. Diagnosed with SMA, or spinal muscular atrophy, Ariella has been living with a neuromuscular disease her entire life, though doctors swore she wouldn’t live to see her first birthday.

“The rarity of this disease is what makes her diagnosis so special,” explained Ariella’s mom, Kim. “She has SMA type 0, which means she has no use of her muscles. She can’t eat on her own, she can’t breathe on her own, but she is cognitive.”

Ariella was referred to Children’s Hospital New Orleans when she was around one month old and stayed within the walls of the Neonatal Intensive Care Unit (NICU). She was later moved to the Pediatric Intensive Care Unit (PICU) to test the use of bilevel positive airway pressure or a BiPap machine, which is a form of a on-invasive ventilator, so that Ariella could be extubated.

“We tried a couple of rounds of BiPap, but we eventually chose a tracheostomy for Ariella. So, she’s on a vent 24/7 and eats through a g-tube,” explained Kim.

When Ariella moved out of the PICU and onto a regular inpatient floor, that’s when she met Dr. George Hescock, a pediatric hospitalist who cared for Ariella during another rough patch of her healthcare journey.

“She started having skin issues,” shared Kim, “We learned it was from SMA type 0. What started off as what looked like a normal rash turned into hard black lesions on her extremities. We loved Dr. Hescock, because he really listened to my concerns and was able to refer us to specialists who could help Ariella with her every need. He truly did everything he could to care for her. We even kept in touch after we left Children’s Hospital.”

Now, Ariella is defying all odds as she nears her fourth birthday this December. With her two brothers and big sister around to give her all the love, Ariella is surrounded by constant cheerleaders.

“Her seven-year-old brother can do her feeding pumps, flush her, and do her extensions,” said Kim. “He loves to help! For example, he brushes her hair for her and gets her new toys. When we get her on the floor, he’ll play with her and share his toys.”

As far as personality goes, Ariella certainly has one, according to Kim.

“She may be non-verbal, but she sure knows how to communicate,” Kim joked. “Her facial expressions say it all, and we know exactly what she’s thinking.”

The Children’s Hospital Ventilator Assisted Care Program (VACP) is Ariella’s support coordination agency. The VACP exists to support children who are on ventilators in all 64 parishes. They VACP team assists in everything from appointments to home medical supplies.

Kim says, having a child with SMA has been challenging, but she couldn’t be prouder of her little girl who has proved doctors wrong, and lived these past several years bringing light to their family.

“The whole journey is one of those things where your emotions go back and forth.  There is much fear and plenty of setbacks, but she keeps breaking statistics by being so resilient,” shared Kim.

Sharing the month of December as a birthday month with her two brothers, Ariella is gearing up to celebrate in a big way next weekend with her family by her side.

Head to www.chnola.org to learn more about the Pediatric Hospitalist program and VACP at Children’s Hospital New Orleans.