"Ann-Marie receives her injections every two weeks, with the eventual goal of stretching that timeframe out as her body allows. She visits Dr. Pineapple or, Dr. Paris, every six months and virtually when needed. " 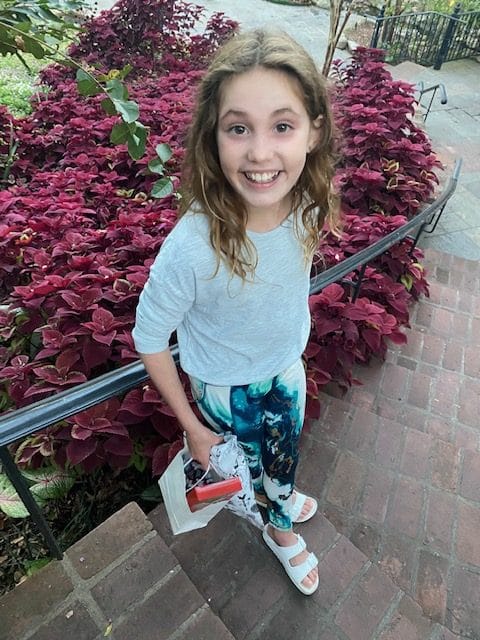 With the seasons changing, many of us experience common allergic flare ups like itchy or watery eyes, runny noses, sneezing and coughing. But, many children suffer from severe, life threatening allergies, like Ann-Marie Dunahoe from Natchitoches, LA.

Throughout Ann-Marie’s first few months of life, she was battling ear infections one right after another. When Ann-Marie was about seven months old, she received her first set of ear tubes, but those weren’t fully performing as they should.

Ann-Marie’s mother, Danielle, sought out an ear, nose and throat specialist at a hospital in New Orleans, and that’s when doctors discovered that Ann-Marie was allergic to nickel. Ann-Marie’s ear tubes were made of nickel, and not plastic, which explained why those tubes weren’t helping. Those tubes were then promptly replaced.

When Ann-Marie was about one year old, she was exhibiting symptoms of eczema, an itchy inflammation of the skin. Ann-Marie and her family visited her pediatrician, a dermatologist, and an allergist attempting to pinpoint the root cause of this irritation.

At around 18 months old, Ann-Marie began an elimination diet to see if the allergen(s) would emerge then, but that process did not go well, recalled Danielle, as it made Ann-Marie lethargic and tired. Then, Ann-Marie had a skin allergy test done and that’s when doctors discovered she was allergic to nuts – peanuts specifically.

At this point, Danielle knew Ann-Marie needed to see a specialist to learn more information about her allergy to nuts and more about the different medications she was taking. After much research, Danielle found Dr. Victoria Dimitriades at Children’s Hospital New Orleans.

“I remember walking in with two gallon-sized bags of medication and I was so confused, I needed help,” recalled Danielle. “Ann-Marie was withdrawn and nervous about seeing one more doctor after being poked and prodded for so long, but Dr. Dimitriades was patient and understanding. She helped us go from all that medication to just one topical cream, one moisturizer and one type of soap. Things began to get much better from there.”

From that time, Ann-Marie was doing well, even with flare ups of eczema and asthma from time to time. Her parents began carrying both an EpiPen and an asthma inhaler with them at all times and ensured her school had them on hand, too.

In 2018, when Ann-Marie was seven years old, Danielle wanted to know the breadth of severity of Ann-Marie’s allergies. She wanted to be equipped with the detailed information on all of the nuts Ann-Marie was allergic to and the severity of each allergy. Dr. Kenneth Paris, a Pediatric Allergy and Immunology specialist, began treating Ann-Marie at Children’s Hospital after Dr. Dimitriades moved away. Dr. Paris ordered an allergy test via blood work. This allowed Ann-Marie’s parents to learn much more about her allergies.

Ann-Marie cannot have anything that reads “contains nuts, may contain nuts, or processed in a facility with nuts.” While ingestion is the most dangerous, sometimes Ann-Marie can break out if she comes in contact with a person or an object with nut residue.

“We were able to learn the ratings for each allergy and it was so eye-opening,” shared Danielle. “It allowed us to be informed and equipped with the resources to teach others about Ann-Marie’s allergies. Dr. Paris is so welcoming and kid friendly. It’s always a great experience to have check-ins with him. Ann-Marie calls him Dr. Pineapple because he wore socks with pineapples on them once and always has on fun socks.”

For a couple years, Ann-Marie’s skin condition was manageable, with flare ups every now and then, with particularly bad eczema patches around her ankles. But it was after she came home from summer camp in July 2020 with impetigo that things progressively declined once again. A few months later in October 2020, Dr. Paris introduced Ann-Marie and her family to their “miracle drug,” an injection called Dupixent that fights eczema and heals the skin and can also relieve asthma.

Ann-Marie’s first Dupixent administration was delayed due to a fever and ongoing infection in her bloodstream from her eczema, but eventually, she was able to begin treatment with this injection and it was life changing, said Danielle. Since beginning this treatment, Ann-Marie has not been nearly as sick as she’s been in the past, and her skin condition no longer defines her.

Ann-Marie receives her injections every two weeks, with the eventual goal of stretching that timeframe out as her body allows. She visits Dr. Pineapple or, Dr. Paris, every six months and virtually when needed.

“It’s hard for me to put into words what Dr. Paris, the nurses, and all the staff do for us,” shared Danielle. “They are working overtime in Ann-Marie’s favor. Whether it’s handling the paperwork for our insurance, responding quickly in the patient portal, they really eliminate stress on the parents’ side. I feel confident that they’re fighting for my child.”

Now, Ann-Marie is ten years old and is the life of the party. She is friendly, affable, hardworking, motivated, intelligent, and athletic. She has maintained a 4.0 GPA despite struggling with dyslexia, and she has played softball, volleyball, and now she cheers, too. She loves to bake and is a huge Chicago Cubs fan.